Boys v Girls High School Hockey
It was a match to capture the imagine, that set brother against sister on rival teams - The High School Minor Boys' against the Senior Girls', High School Hockey teams.
Having won their previous head to head, three weeks earlier, the boys were quick to take the upper hand, and scored in all two great goals, beating Emma Canning's straight strike from a short corner.  The boys put up a great fight and pushed the girls to their limit.  The final score was 2-1 to the boys.

GIRLS' Hockey
Fantastic win for Junior Bs on Saturday, who beat Holy Child, Killiney 3-0. Goals came from Esme Waller and Rachel Donovan, who scored her first ever goal.  All played really well.
The result was more disappointing for The Senior 1 Girls' team, who lost 6-2 in their first league match of the season.  They played against a very strong and experienced Loreto Beaufort side, who are expected to be the hardest team to face in the competition.   Two goals came from Emma Canning on short corners.  Unfortunately, on the day, they were the better side.  Woman of the match was Mia Jennings. 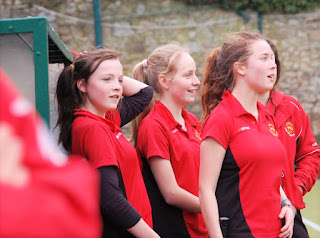 Posted by The High School Dublin at 09:42