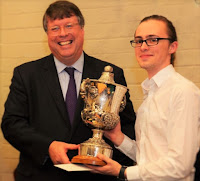 Congratulations to recent past pupil Séamus  MacLochlainn who is to receive an award from the Irish Mathematics Teachers’ Association following his outstanding performance in Mathematics in the Leaving Certificate at The High School in 2015.

Séamus also was awarded the Glorney Exhibition and Cup at the recent HSD Prize Distribution Evening.   The Glorney Cup was originally presented to the school by the Glorney family, whose son, Ernest, a pilot in WWI, died when his plane crashed over England while returning to France.
Lieutenant Ernest Edward Glorney's family named an educational foundation in his memory: The Ernest Edward Glorney Scholarship in Earth Science & Engineering, which is still funding research today. But in The High School, we remember Glorney each year, when the prestigious cup is presented to  an especially high achieving pupil.  A prize richly deserved Séamus!

Posted by The High School Dublin at 08:27