What Always Impresses me About Rugby - HSD V Calrossy NSW 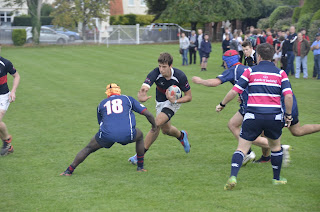 It wasn’t supposed to be this way. Watching painfully from the sideline as two groups of players from worlds apart, came together to do battle on the pitch. Two different styles of play combined for a thrilling affair; back and forth the teams, scrapping for every inch, but all that could separate the teams was the final whistle bringing a conclusion to the contest. But not even the whistle could keep the rivals away for long. Before exiting the pitch indefinitely, both cultures displayed their flags and joined arms to show the true spirit of the game. What always impresses me about rugby is the fact that after 80 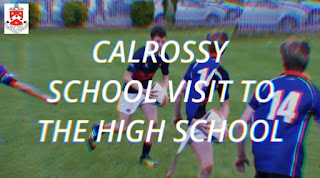 gruelling minutes of battering one and other, you can still come together and have a laugh. The atmosphere in the Dining Room afterwards was buzzing with chat, laughter, and applause as the players shared food and drink with their opposite number and discussed plans for later that evening.
​Edward Meredith (Form 5)
Posted by The High School Dublin at 01:31