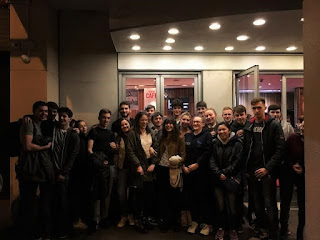 On Tuesday the 20 October, a group of Sixth and Fifth Year classicists assembled in the foyer of the Abbey Theatre to see a production of Sophocles’ play Oedipus. There was excitement in the air asmost of us had already studied the play and, were interested to see director Wayne Jordan’s take on the classic tragedy. The drama has been highly influential in many aspects of modern literature and psychology, such as Freud’s “Oedipus complex”, and was a fascinating text to have studied.  Jordan’s adaptation was hugely successful in capturing the true essence of the play, but like all good productions, elements of it divided opinions within our class (like the singing chorus!) The night was thoroughly enjoyed by all, and we would like to thank Mr. Milofsky and Ms. Browne for organising the outing.
By Alistair Ridyard and Ellen Downey (6DT)
Posted by The High School Dublin at 13:34