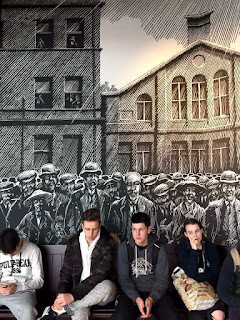 Bright and early on Tuesday 12 January, the Form 4 classes and eight teachers met at Connolly Station. We caught the 9.35 Enterprise train to Belfast Central station excited for the tiring day ahead of us at the Titanic Exhibition in Belfast. After a long train journey filled with card games and monopoly, we reached Belfast Central station at 12am. We then caught another train to the Titanic Quarter, soon arriving at the Titanic experience. We were split into four groups and then we visited different exhibitions within the museum.  The first exhibit illustrated what life was like in Belfast during the early 1900s, when the Titanic was being built at the docklands outside.

Next we visited the slipways to see exactly where the Titanic 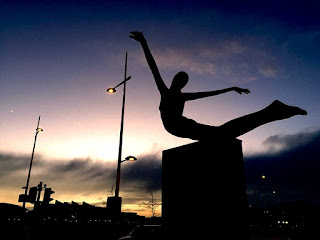 set off for its maiden voyage to America. After lunch, we headed to the interactive workshops, where we learned all about deep sea diving and how marine biologists discover shipwrecks buried deep under the sea.  Lastly we were lucky enough to visit the restored SS Nomadic, the Titanic’s sister ship. The large cruise line was too big to fit in the French port of Cherbourg, so the Nomadic set off from the French town, ferrying passengers onto the Titanic. On board, we dressed up in costumes and received a guided tour of the small ship where the passengers once 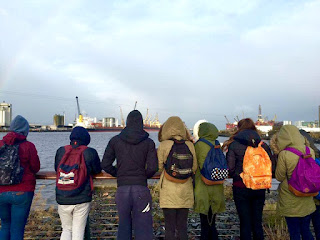 walked!  Heading home, we caught a short train back to Belfast central, and much quieter journey later, 120 exhausted students  arrived at Connolly station, ready to head home.
Posted by The High School Dublin at 05:35