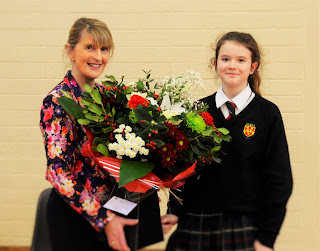 The retirement of Mrs King as librarian at The High School, after 32 years of dedicated service, was celebrated at a special assembly on Monday the 21st December 2015 in the school gym. During the extraordinary whole-school assembly, which was attended by many former staff and pupils, tributes were paid to Mrs King to thank her for her loyal service to The High School community over the past three decades, in charge of the oasis that is The High School library. Contributions were led by Mr D Miller, who, along with current and former pupils, acknowledged her immense contribution to the life of the school, and for the kind, caring and creative manner in which she has fulfilled her role as librarian. 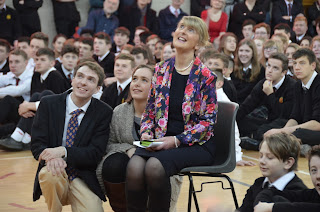 Throughout Mrs King’s tenure at The High School, she tirelessly developed the library into the haven that exists there presently. From a modest assortment of books when Mrs King took over in 1983, she has overseen the collection grow to in excess of 11’000. As well as investing significant amounts of time into continuously expanding and updating the literary collection, Mrs King was responsible for the development of the library into the social and artistic hub of the school that it is today. After establishing the ‘Friends of the Library’, now the Library 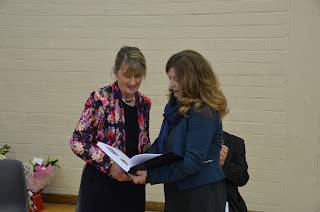 Committee, dozens of diverse literary and artistic events were celebrated annually, including European Day of Languages, National Poetry Day, National Book Week, National Science Week, Shakespeare’s Birthday, Pi Day, Europe Day, and the Library Christmas Art Competition was held each advent. Distinguished authors and poets regularly address classes in the library, and throughout the years these have included none other than Seamus Heaney, Siobhán Parkinson, Aubrey Flegg, Éanna Ní Lamhna, Judy-May Murphy, Denise Deegan and Peter Prendergast. In addition to the regular curating of the library, 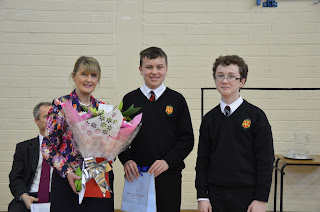 Mrs King invested a huge amount of time to the establishment and running of numerous charity initiatives within the school. These included the annual winter swim at the 40 Foot (which is now the Helen Kane Memorial TY Charity Challenge), Breast Cancer Awareness Month, Lollipop Day for Oesophageal Cancer, Daffodil Day for the Irish Cancer Society, Holly Day for the ISPCC, and ‘Feed the Pig’ for Barnardos. The ‘Feed the Pig’ initiative became something of a noted High School tradition, as whatever money was collected for Barnardos, Mrs King would generously double! When reflecting on 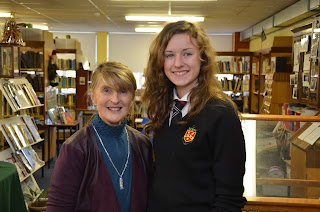 memories and people, it’s often said that it’s not what someone did that you will ultimately remember, but how they made you feel. So as time marches on, many of the library’s displays, events, and celebrations may become but paragraphs in the Erasmian and Diocesan Times. Though what will continued to be cherished and remembered is how Mrs King made each staff member and pupils feel every time they crossed the threshold of that library door on the B Floor corridor. Once you entered, you knew you had stumbled upon an oasis - High School’s very own ‘City on a Hill’. Each person, regardless of circumstances, was made to feel valued, respected and truly part of a community - values the school 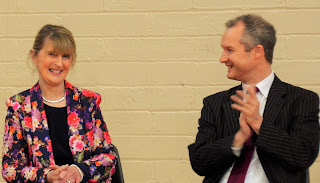 espouses to foster. Why the library is held in such esteem by the entire High School community, both past and present is plain to see. It’s not simply due to its collection of 11,000 books, nor due to its location in such an institution. It’s completely and utterly due to one thing and one thing only. In fact, one person and one person only. For the past 32 years, Mrs King has contributed immeasurably to The High School and has been a constant motivator and supporter for so many. She has always been there 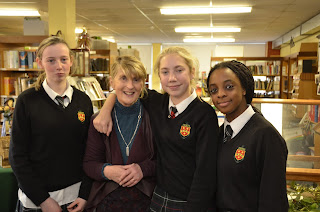 to lend a hand, or simply hear you out, whether pupil or staff, past or present. There has hardly been a minute that passed in the library without hearing a joke, a laugh or a word of affirmation from her. Absolutely no one could be more kind, caring, considerate and understanding than she, and the library would certainly not have been the same without Mrs King. We wish Mrs King, and her husband Robert, our congratulations and all the very best for her retirement.

Posted by The High School Dublin at 12:55

Email ThisBlogThis!Share to TwitterShare to FacebookShare to Pinterest
Labels: Librarian retires after 32 years at The High School, Mrs Kings retirement