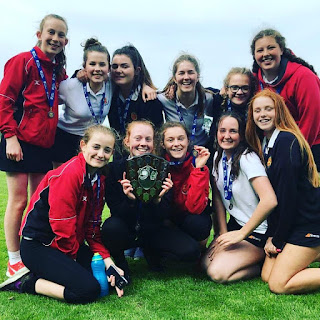 The High School Junior A Cricket team won their League Final on Friday. The match kicked off at around 1:30 pm in Columba's College, against Wesley College. They batted first and after a long 20 overs, finished on 130 runs. They swapped over, unsure whether they would win or not. Wesley's first two batters were out within the first 6 or 7 overs. The next two batters made most of Wesley's runs, and The High School started to doubt themselves. Finally during the last over, Laura Tuite took two wickets, and the game ended, Wesley falling 15 runs short. Man of the match went to Laura Tuite for her phenomenal bowling. Medals were awarded to both teams, and speeches were made by the High School's captain, Shauna Power, and Wesley's captain. After a very exciting and tense game, they headed to MacDonald's to celebrate. Thank you to Mr Malin and Miss Beamish, our coaches, for all their effort, and to everyone else who helped us to win the league!
Posted by The High School Dublin at 12:17 No comments:

Sports Day at The High School 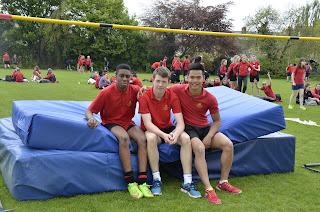 The entire school participated in a wonderfully successful Sports Day last week.  Activities took place on the large sports field next to the pavilion and in the gym involving competitive track events (sprint, middle distance, and relay races) and field events, (long jump, high jump, javelin, and shot putt) with fun activities too.  The Student Council arranged to have an Icecream Funday fundraiser to collect money for Down Syndrome Ireland and raised over €170.  One of the highlights of the day was the pupil-teacher tug-of-war event.  This year the teachers were victorious much to the delight of all involved.  Canteen facilities provided delicious food throughout the day which was much appreciated
Posted by The High School Dublin at 08:12 No comments:

Email ThisBlogThis!Share to TwitterShare to FacebookShare to Pinterest
Labels: Sports Day at The High School 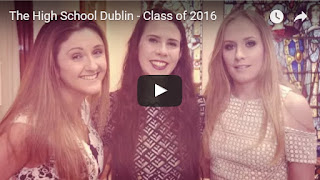 On Wednesday  25 May, 6th Year pupils, gathered with their parents, teachers and school staff to celebrate their graduation from The High School.  It was a lovely evening, which began with a service at Zion Parish Church, followed by an evening of music and speeches, where pupils received their hard-earned High School graduation certificates.  It was an unforgettable night.
Posted by The High School Dublin at 03:06 No comments:

Roseanne Mc Cullough has achieved a Cross Country bronze medal in a home international. The All-Ireland finals were held in Sligo, where Roseanne placed 8th in the intermediate girls’ race qualifying for the Ireland team. The home cross-country international SIAB’s were held in Scotland on 21 March 2016. The teams competing were Ireland, Scotland, England and Wales. Rosanne secured a 4th place position which qualified her for the Irish team and placed 23rd overall. Ireland received a bronze medal placing 3rd as a team. Roseanne finished 23rd overall and fourth best of the Irish team.  Well done, Roseanne.
Posted by The High School Dublin at 00:00 No comments: 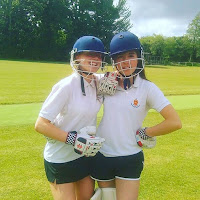 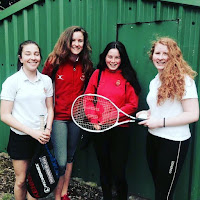 Congratulations to The High School junior tennis team whose 2-1 win against Mount Anville has earned them a place in the tennis league final.  They play another (higher) Mount Anville team in the final which takes place on Monday 23 May, in Templeogue Tennis Club.  If they win they will have been unbeaten in seven games. The best of luck in tomorrow's match.
Posted by The High School Dublin at 23:56 No comments: 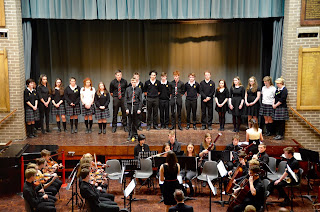 Well done to all involved in last week's summer concert which included dazzling classical, jazz, pop and rock performances.  Over two dozen different acts performed in front of a delighted audience for over two hours.  From junior to senior pupils, the very best of High School's talented performers came together to celebrate their passion for music.  It was especially poignant to hear Form 6 pupils perform for the last time as an ensemble, though we know that their careers in music will continue well into the future.  For those of you who missed the concert, there are various video clips for you to enjoy on The High School Youtube channel, as well as audio clips on our Soundcloud channel.  Thank you to Ms Bourke and Ms Rothwell for their tireless dedication to music as we eagerly look forward to next year’s stellar event.

Posted by The High School Dublin at 06:47 No comments:

The High School Chamber Choir sings - The Sound of Silence

Posted by The High School Dublin at 06:28 No comments:

Email ThisBlogThis!Share to TwitterShare to FacebookShare to Pinterest
Labels: The High School Dublin, The Sound of Silence 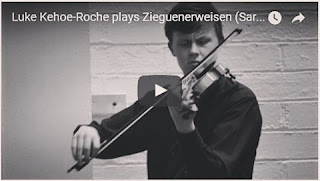 Posted by The High School Dublin at 06:24 No comments: 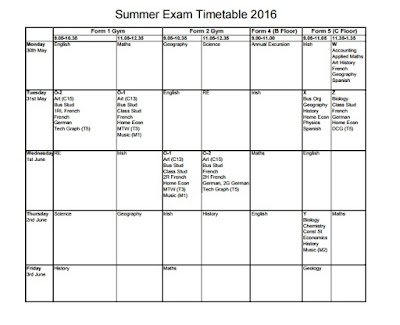 Posted by The High School Dublin at 00:27 No comments: 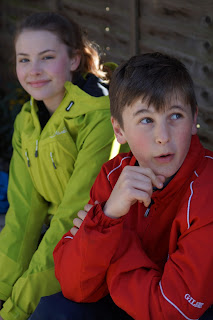 Robert McLaughlin. This Easter and the year previous, Robert travelled to “Kidane Meheret” Orphanage in Ethiopia completely funded by himself. He volunteered and stayed at the orphanage for two weeks and also brought educational and medical supplies with him. Those that know Robert will know that his enthusiasm and desire to help others is overwhelming. His accounts of the children living there with little chance of adoption is both heart-breaking and inspiring. A remarkable young man that will surely make a huge impact on the lives of many others in the years to come. Well done Robert.

Jacob Kennedy. Has been accepted into the IYGO (Irish Guitar Orchestra) following rigorous auditions. This is the first national classical guitar orchestra. Auditions were held in Derry Waterford cork Limerick and Dublin. The age range is from 13 to 23 so he was up against some stiff competition. They will be touring during the summer ending with a concert in The national concert hall and will be playing with two internationally acclaimed guitar quartets. Jake has won the ESB Feis in 2014 for under 15's classical guitar and is now playing with the LPSM string orchestra and the LPSM Guitar Orchestra. He has also recently joined the Choral Scholars based in Sandford Church. Well done Jacob.

And finally, the team award this term goes to the Minor Boys Hockey Team who won the John Waring Tournament. The first time this has ever been won by a High School Team - All Ireland Champions. A superb achievement by the team and coaches.

Well Done to all our winners and Thank you again for your nominations.
Posted by The High School Dublin at 06:09 No comments: 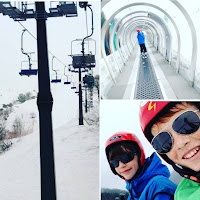 On the 2 April, 53 High School pupils flew out from Dublin airport to Nice airport, for the annual Form 2 ski trip. We arrived at Hotel Marguareis in Artesina, Italy at after a 3 hour bus journey. Over the next 4 days, we skied at the resort, divided into the Beginners, Intermediate and Advanced groups. There were two lessons per day, two hours in the morning and another two hours after lunch at the hotel.  Over the course of the holiday, there were several night activities, including swimming and a movie night, which everyone enjoyed. After a stop at a shopping outlet, we flew home again from Nice airport last Thursday. Thanks to Mr McBride and all the other staff; the trip was a big success!
Posted by The High School Dublin at 07:00 No comments: 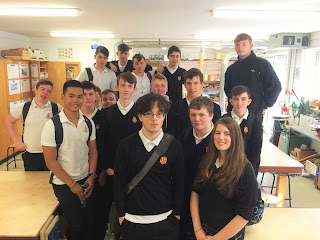 As part of The High School's 1916 commemorations, Transition Year Construction Studies pupils and their teacher Mr L Middleton have designed and created a poignant 3D art piece which is now on display at the 1916 Sackville Street Art Project at the Botanic Gardens.  The objective of this project is to remember each of the 262 civilians killed in the 1916 Rising. Two High School past pupils, both of whom worked at Guinness's Brewery, are counted among the civilian casualties.  However, the pupils focused on one of the men, Mr Holden Stodart, a 33 year old volunteer superintendent with the St John Ambulance Brigade who was shot near Northumberland Road as he tended to a soldier.  The other was Mr William John Rice, a 35 year old night watchman at Guinness’s Brewery who was arrested as a volunteer when he arrived for his shift and was taken out and shot. Concerned for his welfare, his colleague and housemate, Mr Cecil Dockery went to the brewery next morning to search for his friend and he was executed too. Stodart, Rice, and Dockeray were all Guinness employees, the former two were High School past pupils.  However, in an ironic twist, we recently learned that the third man, Mr Cecil Dockeray too has a High School connection.  He is the grandfather of retired High School deputy principal, Mrs Joan Geoghegan.  The old school building 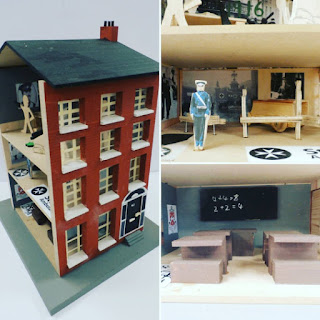 in Harcourt Street was turned into an impromptu hospital during the Rising, and this fact is represented in the pupils’ project.  Pupil Sarah Morley (4B) explains: ‘The team of pupils working on the project wanted Stodart's house to show the different aspects of High School's story during the Rising. So we designed the ground floor to be a High School classroom during 1916. The middle floor represents the school's connection with the St John Ambulance Brigade, while the top floor features soldiers in combat, some of whom were High School past pupils too.’  Stodart, Rice, and Dockeray, and all those civilians who died in 1916 have corresponding houses in the 1916 Sackville Street Exhibition which continues at The Botanic Gardens until 24 April.
Posted by The High School Dublin at 03:48 No comments: