A Fine End To The Season 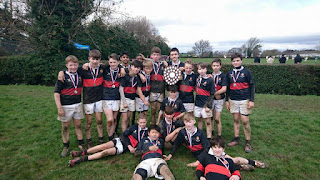 The weather forecast for Saturday 11 March 2017 was showery with a brighter day to come.  In some ways this forecast reflected the fortunes of The High School U14 rugby team as they participated in the annual Central League tournament.  The team was already at a slight disadvantage as the tournament clashed with a Scout's trip so some players, who would have been in contention for a starting place were absent. Nonetheless, the 18 players who represented The High School put in a solid performance.
The matches lasted only 18 minutes and first up High School faced Wesley College on home ground. Wesley are a skillful side and despite a strong performance from The High School Wesley won the match 14-7.  Next came The King's Hospital.  Being battle-ready from their encounter with Wesley The High School put in a strong performance to secure a convincing victory.  Again, in their third match The High School were victorious which saw them progress to the semi-finals.  Here they faced St Andrew's College.  This was a tough contest worthy of a semi-final.  It finished at 5-5, but as the rules of the competition stated that in the event of a draw the first team to score progressed, The High School were through to the final.
We were pitted against Gonzaga College who had won the competition four times in the last eight years.  As the 'first to score' rule still applied The High School players knew an early score was vital.  They pressed Gonzaga hard and were rewarded with a try in the first two minutes.  The remainder of the match saw advantage swing from one team to the other but even the Gonzaga coach commented on the our team's stellar defence.  In the dying seconds of the match Gonzaga broke The High School's line and scored.  At 5-5, The High School were still in pole position, but crucially The High School had missed their conversion kick.  Gonzaga had the opportunity to steal victory with the final kick of the match.  The Gonzaga out-half pulled his kick wide and the day belonged to The High School.
Congratulations to all those players who took part in a well-deserved victory (including those who could not attend on the day) and to the coaches for their commitment throughout the year.
Posted by The High School Dublin at 06:27 No comments: