On Wednesday 3 May, Forms 4 and 5 pupils from the cast and crew of the 2017 HSD One Act Drama Festival Entry, 'Last Class on a Monday', had the pleasure of attending the Abbey Theatre to see the Druid Theatre Company’s production of Samuel Beckett’s 'Waiting for Godot'.  A number of Form 5 pupils had been introduced to Beckett in our Transition Year Drama module, but we didn’t quite know what to expect before watching the play.  The experience, as it turned out, was unexpected!  'Waiting for Godot' proved to be a philosophical journey through an existential crisis from a humorous perspective. The piece was a thought-provoking experience and a great example of how empty Samuel Beckett felt his time was when he served with the Red Cross in Normandy. The staging was magnificent and the performance was expertly acted with subtlety and class. Overall, the visit to the Abbey Theatre was an extremely enjoyable experience that enhanced our knowledge of drama.
Avery Angle
Posted by The High School Dublin at 04:29 No comments: 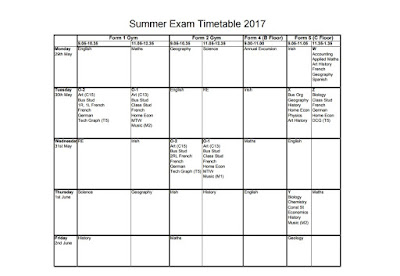 Posted by The High School Dublin at 01:15 No comments: