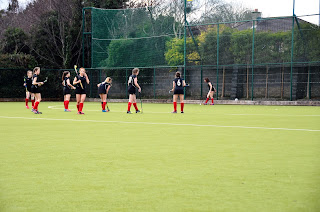 (I begin this review with a disclaimer that my hockey knowledge is rather sub-standard.)
The High School Dublin faced off against pre-tournament favourites Loreto Foxrock away from home on Tuesday the 31 st of January. Despite their underdog tag for much of the game it was The High School that looked to be the far better outfit.
The team’s performance was cohesive and assured with head coach Ms Gray setting up two disciplined banks of four that a certain Mr Simeone would be proud of. A scrappy goal early in the first half was the reward for High School’s early pressure on the Foxrock goal.
Foxrock piled on the pressure in the second half with a remarkable accumulation of short corners however The High School rear guard seemed impenetrable and soaked this extraordinary pressure up until a goal ward shot was illegally blocked ten minutes from time. The resulting penalty flick was scored and the game was levelled. An electric break up the pitch from two of the team’s veteran performers came close to sealing what would be a deserved victory for the Rathgar side but as the move broke down in the Foxrock ‘d’, 1 v 1s beckoned. A final forage forward was made by Foxrock and as their attacker moved to the by-line a foul was drawn.
What followed was pure, unadulterated rage from the High School side-line, a penalty flick had been awarded. My aforementioned lack of knowledge about the sport prompted me to turn to Google in order to establish why the penalty was awarded. What I found on the matter was the following: “In field hockey, a penalty stroke, sometimes known as a penalty flick, is the most severe penalty given. It is predominantly awarded when a foul has prevented a certain goal from being scored.” This led me to Googling another definition: ‘Thievery – the act of stealing another person’s property’. In the case of The High School team a place in the semi-final had be well and truly stolen from them.
As the players dejectedly, trudged off the field I could not help but cast my mind back to the champions league semi-final of 2009 as I witnessed from a similar spectatorial position the Chelsea players crowd the referee as they left the pitch. The High School players were far more magnanimous but the injustice felt was no less deep. A fine performance from a young team was seen today with the potential for the next few seasons which is extremely exciting.  As for the Form 6 players, they can retire their black jerseys, which they have worn with great honour, skill and pride, and cast their minds back to the happier matches of January 2015.

Posted by The High School Dublin at 06:02 No comments: