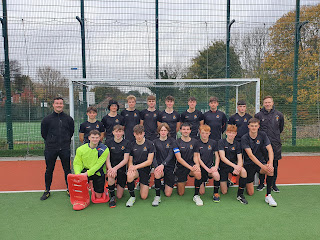 The High School started out strongly with Ben Pasley acting as the glue in midfield linking with the wing backs Sam Walsh and Marcus Empey who found the forwards.  The game started well with an Eli Breen run through the middle defeating several players to create a dangerous circle penetration.  The deadlock was broken with a lovely Tom Whelan attack down the right and a forward shot to the keeper's right.  Ben continued with great pressure in midfield turning the ball over to score a solo goal on the run from his own half.  It was 2-0 at half time. 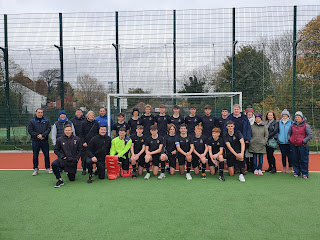 The second half started well with HSD continuing to attack down the wings concluding with Sam Maxwell skillfully turning defenders inside out to find Alex Lynch free in the middle of the circle.  Alex dispatched the ball into the top corner.  A continuous dominance from centre backs Luke Fitzpatrick and Darragh Sullivan saw them pick out the dynamic forward line of Oscar Loftus, Oscar Maguire, Tom Whelan, Ryan Wynne, Chris de Lacy and Alex Lynch.  The attacking continued through the midfield to find Ryan Wynne at the top of the circle. He had an amazing strike that fell to Eli who scored a wonder strike from 1 yard.  Another good lead from Charlie Beatty saw a shot saved; Eli picked it up but the tap was saved and a well-taken rebound secured the goal for Sam Maxwell.  The Most Valuable Player was awarded to Sam Maxwell for his consistent attacks down the right hand side.  A clean sheet for Luke Stevens with the help of the midfield generals Charlie Beatty and Sean O’Brien contributed to a 5-0 victory and a great start to the All Ireland campaign for The High School.  We would like to thank all supporters and staff for their continuous encouragement.

Posted by The High School Dublin at 11:32