Thoughts on The Recent All Ireland Hockey Final 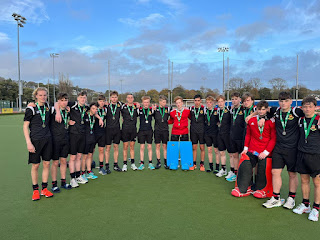 On Friday 28 October  a group of tired but excited senior pupils boarded a bus to Cork at 7:30 am to watch our Senior 1 hockey boys in the semi-final stages of the All Ireland Schools (Boys) Hockey Championship for the second consecutive year.

Our  first stop was Ashton School to face fellow Dublin opposition Kings Hospital in the semi final.  The bus on the way down was filled with a surprising amount of energy and chatter for such an early hour, face paint was handed around and by the time we exited the bus at 10:30 am in Cork we were all covered in red and black.

The first game was a very close affair, the only score separating the teams was a brilliant penalty stroke converted by captain Ben Pasley in the 2nd quarter.  The first quarter was mainly dominated by the oposition but High School pulled back taking over the second.  At half time the score was 1-0 thanks to a goal scored by Ben Pasley.  The High School dominated the 3rd quarter, unlucky not to score several more goals and creating numerous opportunities for themselves.  In the final quarter the oposition started strongly, throwing everything at their last chance to make the All Ireland semifinal.  However, despite their efforts, thanks to brilliant defending and goal keeping, The High School managed to keep them at bay until the final whistle.  Relief was felt all around and the anticipation began to grow for the All Ireland final.  After waving goodbye to our Senior 1 players, full of excitement, the group of supporters headed to the Marina market in Cork's harbour for some well-earned food and rest after all of our cheering.  Voices were beginning to get  hoarse but we didn’t let that stop us as we boarded the bus again at 2:30 pm, refuelled and ready to go to UCC for one last big game.

The atmosphere on the bus was one we will never forget, every single person was both proud and excited to get to see yet another game of incredible hockey, we exited the bus with banners and music in tow.  We firmly positioned ourselves against the fence of the pitch and began to cheer on the boys as they warmed-up. Our opposition was the Senior 1 boys team from Banbridge Academy, a very strong team from Northern Ireland.  Banbridge started well and went 1-0 up after just 5 minutes. At the end of the 1st quarter the score was 1-0 to Banbridge.  In the second quarter Banbridge scored again but just a few minutes later The High School pulled one back through Ben Pasley making it 2-1 at half time.  Despite Banbridge dominating the first half, The High School team were not deflated, cheered on ecstatically from the sidelines, they came out fighting in the second half, every single player gave their all, although they were exhausted from their 2 intense games.  They put their bodies on the line and earned themselves a well deserved goal through a short corner from Charlie Beatty.

The score on 2-2 tensions were high, but The High School were well on top and the supporters continued to cheer and the boys continued to throw everything at the game. Despite several efforts and brilliant defending especially by Sam Maxwell as first runner in the short corners, we were unable to score a 3rd.  A short corner for Banbridge in the last two minutes created a moment of fear for The High School supporters but goalkeeper Luke Stevens pulled off an incredible save to keep us in the game.  The full time whistle went with the score at 2-2.  The game went to 1v1s, despite some brilliance from Adam Hearne as goalkeeper and great goals from Alex Lynch and Tom Whelan, Banbridge emerged winners.

I think if you asked anybody at that game they would tell you that The High School could not have given more of themselves to the tournament.  From the very first game every single player did everything they could for the team and brought so much joy to all of us who were lucky enough to watch the games.  Hockey has given all of us so many great memories in school and on behalf of Form 6 pupils I would like to thank all of the boys for all of the joy they gave us watching those games.  It was a special experience get to see the boys we have grown up with for the last 6 years, make us so proud on such a massive occasion.

Posted by The High School Dublin at 03:26